After the bill on the funding of municipal pension plans was assented to last December, the National Assembly continued its work, introducing An Act to amend the Supplemental Pension Plans Act mainly with respect to the funding of defined benefit pension plans (Bill 57) on June 11, 2015.

The provisions of Bill 57 stem from a consensus reached by the Comité consultatif du travail et de la main-d’œuvre (CCTM), which comprises representatives from the CSN, the FTQ, the Conseil du patronat du Québec and the Fédération des chambres de commerce du Québec. This consensus reflects a compromise between benefit security and cost affordability.

Bill 57 would come into force on January 1, 2016 and the key funding rules would be as follows: 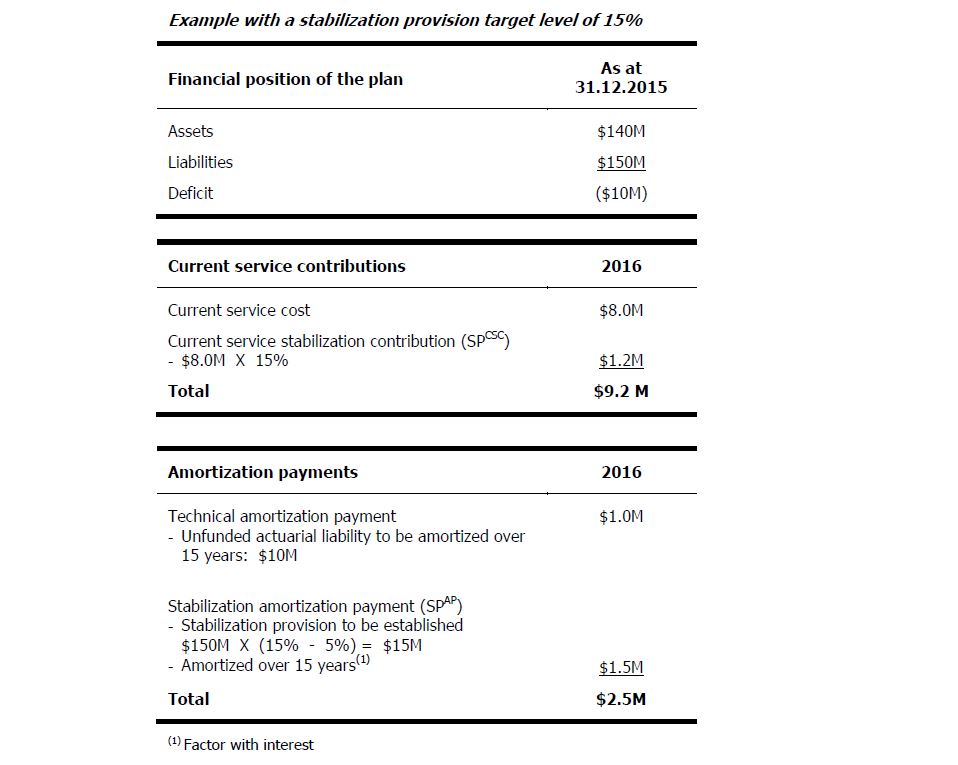 Impacts on the funding of your pension plan

The impacts of these new funding rules will vary greatly from plan to plan, depending on various factors, including:

These new funding rules should contribute to achieving greater contribution stability for all private sector pension plans. Two transitional measures will apply to minimize the impacts of the new funding rules in the short term. The first measure is a temporary increase in the amortization period for deficiencies, as previously highlighted. The second measure is the gradual introduction of new contributions required. If Bill 57 results in an increase in funding contributions, this increase will be phased in between 2016 and 2021.

When a plan is in a deficit position, the technical amortization payment and all stabilization contributions made will support the quick funding of the existing deficit. When the plan is balanced or in a surplus position, stabilization contributions will be used to gradually establish a financial cushion, which will contribute to achieving greater contribution stability and benefit security. This financial cushion can be used to absorb experience losses that would have otherwise resulted in deficits.

The graph below presents the financial position of a mature pension plan that is in balance on a going concern basis and that would have a stabilization provision of 15%. This graph illustrates contributions in accordance with current financing rules, which therefore vary depending on the financial position of the plan on a solvency basis. The dotted grey line indicates the contribution level that would ultimately be required for this plan under with Bill 57 (i.e. without taking into account the transitional measures).

Plan improvements and use of surplus

The cost to fund plan improvements should be increased by the amount required to establish the resulting stabilization provision. The portion not funded by the surplus should be amortized over 5 years and special provisions could apply if the plan is in a deficit position.

Rules on the use of surplus, while the plan is ongoing and upon plan termination, would be completely revised as follows:

Other provisions applicable to all pension plans

It is our understanding that other provisions of Bill 57 would apply to all pension plans, including municipal and university sector pension plans. These provisions are as follows:

It is important to note that since the D’Amours Committee report was published, several plan sponsors have been waiting for a bill to be assented to permitting a complete transfer of responsibilities through an annuity purchase, as recommended by the committee. We believe that there could be a significant increase in the demand for annuity purchases after Bill 57 is assented to, which could create an imbalance between the supply and demand and become an issue for those who are late in making their decision.

Regulations must be published to clarify the technical details relating to the application of Bill 57, including the scale to be used for the stabilization provision in accordance with the investment policy and the content of funding and annuity purchasing policies. A parliamentary commission on Bill 57 should be held in the fall.

Finally, the government should also introduce in the fall another bill specific to the funding of university sector pension plans.

The Normandin Beaudry consultants will continue to monitor developments relating to these bills. Please feel free to send us your questions.