Accounting standards applicable to employee future benefits: What assumptions do Canadian companies use?

Several private sector companies must include the recognition of their obligations towards defined benefit pension plans (DB plans) and group insurance plans offered to retirees (other post-retirement benefits) in their financial statements.

The assumptions required to determine the defined benefit obligation and the defined benefit cost (the expense) must be established by the company’s management. Again this year, we have analyzed the assumptions that were used, but have revised our methodology in order to include in our analysis more companies listed on the S&P/TSX Index. We have analyzed the annual reports of Canadian companies listed on the S&P 60 Index (60 largest companies) and on the S&P MidCap Index (mid-cap companies) whose fiscal year ended between September 30 of the previous year and February 28 of the current year. Close to 80 companies are sponsoring at least one DB plan and 75% of them are offering other post-retirement benefits. Finally, 85% of the companies disclose their results in accordance with International Accounting Standard (IAS) 19, and the remaining 15% percent disclose them in accordance with U.S. accounting standards.

Our analysis is divided into three sections. The first section presents the assumptions used by the companies included in our analysis in percentile format. The tables present a comparison of the assumptions used for fiscal years ending in 2014 (between September 30, 2014 and February 28, 2015) and in 2013 (between September 30, 2013 and February 28, 2014). The second section summarizes the findings from these tables and from our data analysis. The third and final section presents additional information with respect to measures that could potentially impact future accounting results for some companies. 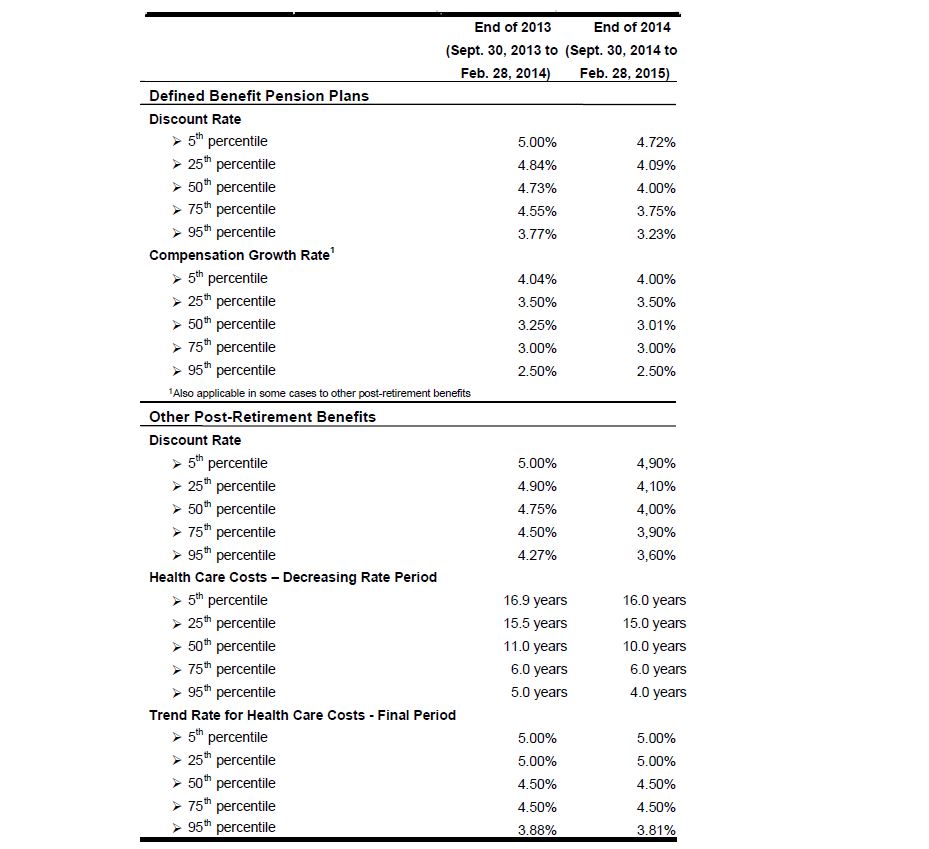 The IASB will soon be publishing an exposure draft aimed at clarifying that, in cases where the defined benefit obligation is remeasured during the year (amendment, curtailment or settlement), the current service cost and net interest for the remaining period should be calculated using the same assumptions as those used for the remeasurement.

A new approach concerning the discount rate assumption is currently being discussed on the market. This approach involves the use of several discount rates to reflect the different benefits payment schedules for active employees and retirees participating in the same plan. Several issues have been raised in relation to this approach. Market stakeholders (companies, auditors, actuaries) will need to agree on their level of comfort with the approach in accordance with various standards (IFRS, ASPE and U.S. standards). We will keep you informed of further developments regarding this approach.

Please feel free to contact us for additional information.